February 18, 2014. The brickbats cast at the Obama administration for appointing unqualified candidates to important ambassadorial jobs notably did not include any directed at envoys to the South Asian countries. Unlike the representatives Obama has nominated this year to the fleshpots of Western Europe and other comfortable parts of the world, all six American ambassadors assigned to South Asia are career Foreign Service officers, five with previous experience in their host countries or elsewhere in the region. Campaign bundlers and other would-be politically-appointed ambassadors haven’t been breaking down the doors to reach this challenging and often dangerous part of the world. With some noteworthy exceptions, mostly but not exclusively in India, those among them who have been chosen have not brought assets to their embassies that Foreign Service officers could not have provided. The South Asia experience makes a good case for the assignment of FSOs as ambassadors. END_OF_DOCUMENT_TOKEN_TO_BE_REPLACED

January 8, 2014: Bangladesh’s January 5 parliamentary election dealt a serious blow to the country’s fragile democratic institutions. With major opposition parties boycotting the voting and violently pressing their demand that the polling be held as before under a caretaker administration, the ruling Awami League and its allies won a huge majority of the seats, over half of them without a contest. The United States and other concerned foreign governments and international organizations have criticized the way the elections were conducted and the violence that marred them.  They have vowed to keep pushing for an agreement that will set the stage for more credible fresh elections.

Prospects for such a settlement in the near future are not promising.  The reelected government and the opposition, led by bitter rivals renowned for their stubbornness, disdain for one another, and unwillingness to admit error, are likely to hang tough.  They and their supporters will be more influenced by the impact the political situation and the violence that accompanies it have on the country’s key ready-made garment industry than by the admonitions of friendly and concerned foreign governments.

END_OF_DOCUMENT_TOKEN_TO_BE_REPLACED

October 26, 2013: Pakistan Prime Minister Nawaz Sharif came to Washington on October 20-23 determined to create a new beginning, personally and politically, with the U.S. leadership. The U.S. government wanted to bring Pakistan into closer alignment with U.S. goals and strategies as the time for U.S. combat troops to leave Afghanistan approached. The two sides left some important matters unresolved or papered over, most significantly differences over future U.S. drone attacks on Pakistani territory. But they did develop a personal and political framework which may help them make further progress while managing remaining differences more effectively. It would be an exaggeration to claim that the summit solved the serious problems in U.S. – Pakistan relations, but its strong focus on the economic relationship did start to place attention on some aspects of the relationship where Pakistan is not treated simply as an extension of the Afghan problem.

END_OF_DOCUMENT_TOKEN_TO_BE_REPLACED

October 2, 2013: Few were surprised when Prime Ministers Manmohan Singh and Nawaz Sharif made little headway in reversing the recent deterioration of India-Pakistan relations when they met in New York on September 29.  Nawaz’s election in May on a platform that included improving ties with India, especially in the economic sphere, generated rosy hopes. These were dimmed by an outbreak of serious violence in Kashmir and by the preoccupation of both governments with other pressing problems.  The weakening of Manmohan Singh’s Congress government by an economic slump and a series of high-level political scandals has also taken its toll.

END_OF_DOCUMENT_TOKEN_TO_BE_REPLACED 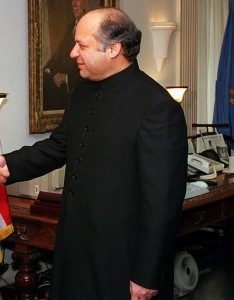 On the economy, as we have seen, Nawaz Sharif is a man in a hurry. The 15-day deadline he gave his cabinet colleagues to develop action plans for their ministries underscores the priority he places on early, visible improvement in Pakistan’s economy and administration – and on creating a contrast with Asif Zardari’s record. In foreign affairs, he will seek to maintain Pakistan’s position in Afghanistan, manage and if possible repair ties with Washington, and contribute to his economic goals, including if possible moving forward with trade opening with India. The accent will be on continuity, albeit with a more strident tone in his objection to U.S. drone attacks, and on avoiding confrontation with the Pakistan army. For the United States, the challenge will be not to treat Pakistan as an extension of its Afghan problem.