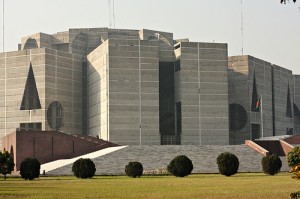 June 12, 2011:  For over a month, Bangladesh’s always contentious political scene has been dominated by partisan controversy sparked by a May 11 Supreme Court that declared illegal the country’s constitutional provision for holding parliamentary elections. Adopted in 1996, this mandates that on the completion of its normal five-year term in office, the government of the day must transfer power to a caretaker administration responsible for overseeing a fresh parliamentary election.

The court’s decision was welcomed by the country’s ruling party, the Awami League led by Prime Minister Sheikh Hasina. It has been bitterly denounced by the Bangladesh National Party, headed by Hasina’s longtime rival Khaleda Zia, the leader of the parliamentary opposition. The BNP has declared that it will not participate in the next parliamentary elections, expected in early 2014, unless the caretaker government system remains in place. To condemn the decision and rally anti-government support, the party has mounted a series of hartals, a traditional South Asian political tactic involving the enforced shutdown of all normal public activity.

As with so many aspects of Bangladesh politics, in which the opposition regularly castigates the government for adopting policies and tactics it had itself sponsored when it was in office, there is a rich irony in this latest controversy. The caretaker government provision, unique to Bangladesh, was agreed to reluctantly by the BNP following an agitation by the Awami League. Now the two parties, still led by the same two determined and uncompromising women, have reversed their positions.

The caretaker arrangement has had a checkered history. It worked reasonably well the first two times it was used, or at least as well as any electoral system could in Bangladesh’s notoriously poisonous political atmosphere. Foreign observers certified that both those contests had been acceptably free and fair.

But in 2007 the system failed miserably. The provision mandates the selection of the most recently retired chief justice to head the caretaker government as “chief adviser.” As the 2007 election neared, the BNP government changed the retirement age of judges so that one sympathetic to the party would become chief adviser at election time. The Awami League, convinced that the caretaker administration was rigging the election against them, withdrew from the race and took to the streets. As widespread violence threatened, the army forced the installation of a new, less controversial chief adviser who led a reorganized caretaker administration for almost two years under the military’s watchful eye. This administration then supervised the most recent elections, in December 2008. This fair vote brought the Awami League and Sheikh Hasina back to power. She has now reached the half-way mark of her anticipated five-year term.

Commentators were quick to point out a curious aspect of the Supreme Court verdict. The court ruled that the system it had just declared illegal could be practiced for another two parliamentary elections “for the sake of the state and its people.” At the same time, it requested parliament to amend the constitution to assure that neither a former chief justice nor any other supreme court justice would be chosen to head a caretaker regime if the system is kept for another two election cycles. A parliamentary committee has been charged with devising a new formula in response to the judges’ request.

It’s not clear why Hasina has welcomed the Supreme Court decision, or whether she had any hand in triggering it. (The court had been seized with the issue for eleven years before reaching its verdict.) Her lieutenants had earlier maintained that she was opposed to a change. She may fear that, as in January 2007, the caretakers would come in and stay well beyond their three-month constitutional tenure. More to the point, she may believe that she needs a different system to assure that, unlike every incumbent since genuine constitutional government was restored two decades ago, she would win a reelection bid.

The reasons for the BNP’s protests are more obvious. Party leaders are convinced that voting conducted under an Awami League government would be rigged against it. It will not trust an AL-appointed election commission that would almost certainly be staffed by ruling party loyalists. More immediately, the verdict offers the party an issue on which it can take to the streets in a big way at a time when it has had difficulty finding politically effective causes.

Bangladesh’s political leaders are certain to have great difficulty finding a formula to replace the present caretaker arrangement. The ill-will and mistrust the major parties and their leaders hold for one another has increased over the years. Neither, in power, has been willing to give its defeated opponents an acceptable political role. And neither, out of power, has been prepared to play the role of a “loyal opposition,” loyal not to the government but to the constitution. The wrangle the Supreme Court verdict has triggered only makes matters worse. It is likely to lead to another crisis as the next election draws near and to increase instability between now and then.