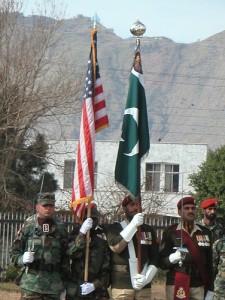 Turnover of last US Mash in Pakistan. From http://www.flickr.com/photos/travlr/104367309/in/photostream/

May 17, 2011: Two weeks after the “Abbottabad incident,” as the raid that killed Osama bin Laden is being called in Pakistan, the United States and Pakistan increasingly look as if they are moving toward a break. Neither seems prepared to agree to the other side’s public demands. Such a “third divorce” between Washington and Islamabad is not yet inevitable. Rather than trying to put back together an open-ended relationship that is undermined by the strategic gap between the two partners, we believe they should focus on concrete goals and specific operating guidelines that both can honor.

In the wake of Abbottabad, both sides are angry. In the United States, the focus is on bin Laden. NSC Adviser Thomas Donilon said that he had seen “no evidence” that senior Pakistani leaders knowingly sheltered bin Laden, but that leaves unstated the agonizing question – who did know, and what unwritten guidance did they have? On the Pakistani side, Prime Minister Gilani on May 3 referred to the death of bin Laden as a “great victory.” By the next day, the Foreign Ministry was expressing “deep concern.” Opposition leader Nawaz Sharif excoriated the violation of sovereignty involved in the raid. In the media, the stress, increasingly, is on how Pakistan is suffering from “America’s war.”

More importantly, the Pakistan army is embarrassed. It avoided public comment for four days, but then came out swinging, focusing entirely on the violation of sovereignty by the United States. The army chief, General Ashfaq Pervez Kayani, warned May 6 that military relations with the United States would be “reviewed,” and complained May 9 that the civilian government’s “insufficient” formal statements and media response had let down the army. Since then, the voices of journalists, mainly in the English-language media, calling for an investigation of the colossal intelligence failure leading to bin Laden’s presence in Pakistan have largely gone silent. The accent now is on blaming everyone but the army. The top military leadership conducted a marathon briefing May 13 for the parliament, during which the ISI chief twice offered to resign and had his resignation rejected by both Kayani and the prime minister. The army will do whatever it takes to restore its honor in the eyes of Pakistanis. What measures it believes are necessary – inside Pakistan and with the United States – remain unclear.

What is clear, however, is that Pakistan is again playing the hardball game familiar from other times when it has found the U.S. too intrusive.  Press reports indicate that official visas are once again being held up. On May 12, Gilani spoke of a breakdown in relations between CIA and ISI. The U.S. has been permitted to question the widows of bin Laden, but other requests for intelligence left behind in Abbottabad have not been granted yet. This selective response to U.S. requests deepens suspicions in the United States that Pakistan does not understand how fundamental bin Laden was to the two countries’ strategic partnership.

The U.S. is also responding in a familiar way, sending Senator John Kerry to Pakistan, to deliver a stiff warning with a sufficient dose of grace and friendship to get the leadership’s attention. He made a good start, but his task is harder now than it was in February, when he went to Pakistan to secure the release of CIA contractor Raymond Davis. Mutual bitterness over that episode lingers. The United States wants answers to why bin Laden lived in Pakistan for so long; it wants intelligence access; it wants al Qaeda and its friends – including some groups with historical ties to ISI – closed down. In the past, demands like these were met by vague promises. The U.S. side was skeptical, but never pressed the issue home. As U.S. congressmen and senators call for “accountability,” this approach may no longer suffice. And some U.S. demands, notably decisive action against other militant groups, go well beyond what Pakistan is willing to do.

Further complicating the U.S. response are the legal processes now under way in Chicago and Miami which will reveal further allegations of Pakistani involvement in terrorism, some of it with U.S. victims. David Headley, a witness in a trial now taking place in Chicago, alleges that his preparations for the assaults in Mumbai in November 2008 were assisted by serving officers in ISI.

The most fundamental reason the United States and Pakistan may be close to a divorce, however, is the underlying strategic disconnect between them. It has been clear for years that despite talk of strategic agreement, the two countries’ goals are only partially aligned. Pakistan arguably shares the U.S. goal of eliminating al Qaeda influence. But its priority in Afghanistan is building up its own influence and eliminating India’s. The U.S. recognizes that Pakistan will have an important role in an Afghan settlement. But it cannot accept Afghanistan becoming a Pakistani client state.

The death of bin Laden heightens these important differences, and intensifies U.S. suspicion of the primacy Pakistan wants to establish in Afghanistan. It also strengthens Pakistan’s concern that the United States is a short-timer in the region and its determination to maintain relationships with potential power players in Afghanistan even if some of them are viewed as hostile by the United States. This has been the Achilles heel of the two countries’ strategic cooperation ever since 9/11.

Angry over the violation of its sovereignty and the public embarrassment of its army, Pakistan will follow its classic pattern of treating the United States as the supplicant in the relationship.  It will again reason that since the United States needs Pakistan more than the other way around, Pakistan can set the rules of engagement.

The U.S.-Pakistan relationship needs to be recalibrated to avoid a “divorce” that could be disastrous for both countries. Simply accepting Pakistan’s strategic priorities and proposed ground rules is not feasible for the United States, which now has to deal with profound post-bin Laden doubts about what Pakistan is really trying to do, as well as with a ferocious budget crunch and an unpopular war in Afghanistan. Nor is it realistic to expect Pakistan simply to accept U.S. strategic priorities, against the background of its mistrust of the United States and the army’s need to recover from a national and institutional black eye.

Thoughtful, long-time friends of the U.S.-Pakistan relationship like retired Lt. General Talat Masood and Shuja Nawaz have counseled patience. This is necessary but not sufficient.

The United States and Pakistan need to put aside the quest for a strategic understanding based on open-ended trust, the goal both countries professed during their three periods of close cooperation. Instead, the U.S. and Pakistan should engage, with patience and determination, in extended candid discussions aimed at spelling out with some specificity what the two sides are prepared to commit to in the areas most essential to the goals they do share. At the top of the list:

In crafting their understanding, both sides need to do the opposite of what negotiators usually do. Rather than find inclusive language to bridge the gaps, they need to define the gaps and be explicit about where killer issues may be lurking. This approach will permit both sides to assess success or failure more clearly than in the past. It may not lead to an emotionally satisfying relationship – but that is out of reach for now. If the United States and Pakistan can achieve some more concrete, measurable successes, that will be time enough to reach for the “re-marriage” both would probably prefer.

One Reply to “The U.S. and Pakistan: The Third Divorce?”